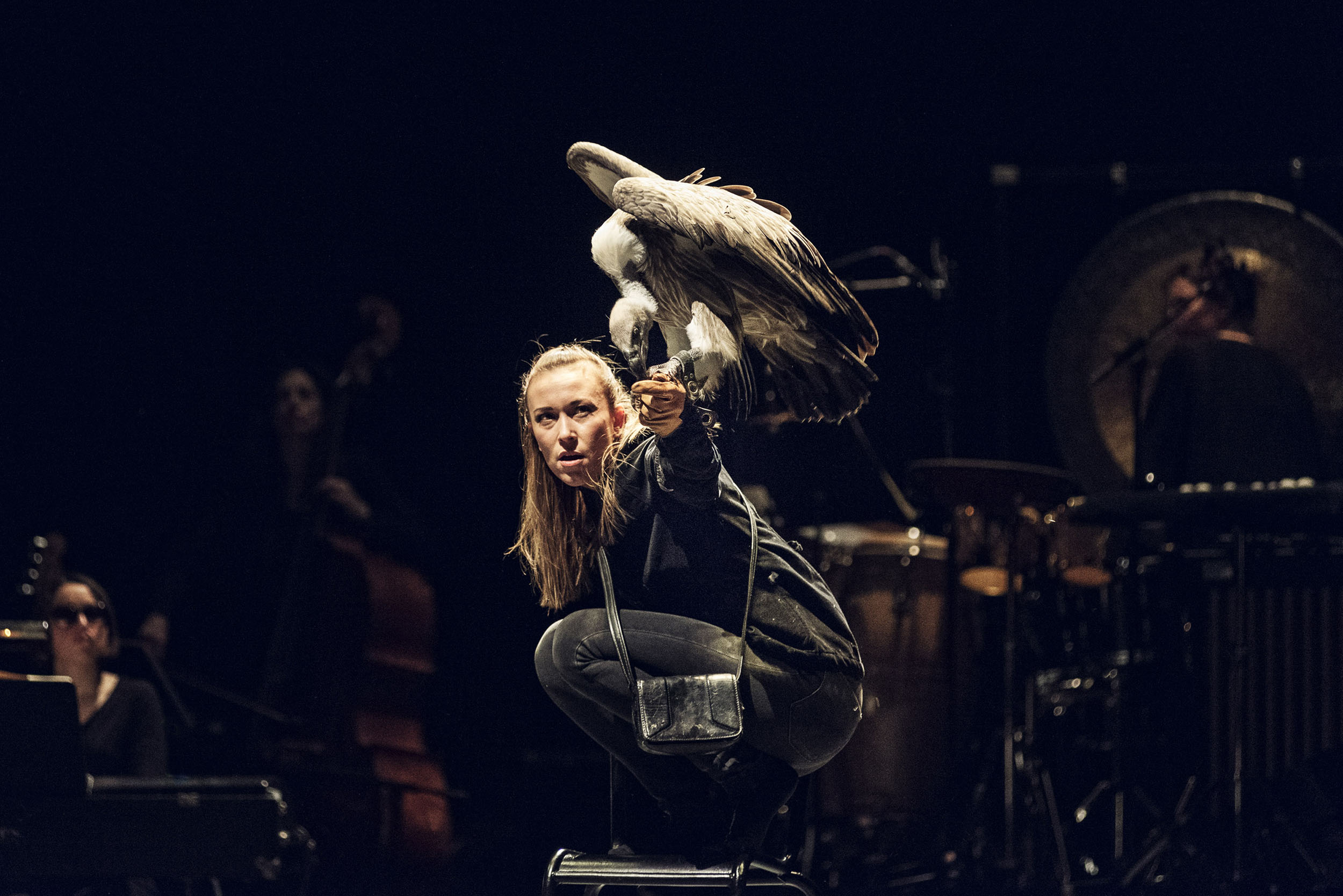 In the Glittering World

During his tenure at Paris Oper, Gérard Mortier called these forms "frontière"... At this borderline or rather cross-border area, Thierry Pécou now introduces the "choreographic oratorio".

The production received overwhelming praise and response from critics and audiences. Waldemar Kamer from Opernfreund said, “Nahasdzáán will bring new audiences to opera, for a new form of opera. Where has this been done? It has not been done before… Thierry Pécou established Ensemble Variances in 2009 and since that time has attracted attention from across the globe with his distinct, beyond definition productions. During his tenure at the National Opera of Paris, Gérard Mortier called these forms 'frontière' ... At this borderline or rather cross-border area, Thierry Pécou now introduces the 'choreographic oratorio.'”
François Cavaillès from Anaclase summarized the work’s unique qualities: “Luc Petton, Laura Tohe, and Thierry Pécou all share the concerns of Anthropocene – the human impact on the earth’s geology and ecosystems. The oratorio ends with a meeting of animals that alerts us to the risks we are taking–notes Pécou in the program. This is the message of the hour and a half show. We are humble and grateful. The ovation by the audience proved it.”
Nahasdzáán (Mother Earth) is built on the stories of the journey of the Navajo people from the First to the Fifth World. The tales lament the destruction of the earth and calls for affirming hope through healing ceremonies. Combining contemporary classical music inspired by Navajo chants, chamber ensemble, dance, and animals, Pécou/Tohe’s dance-oratorio is based on ‘Hozho’ a belief system articulating Navajo’s understanding of health, beauty, harmony and relationships with environment, family and society.
The development process began in 2016 in Window Rocks, Navajo Nation, Arizona, collaborating with family clans and continues dialogue. Luc Petton’s vision is informed by the feminist philosopher Donna Hathaway explorating the philosophical, cultural, and biological aspects of animal–human encounter. Ensemble Variances is committed to linking the music of our time with humanitarian and environmental issues. The dance-oratario is a collaboration of these shared values.
"In Navajo beliefs, animals are not mistreated or hunted for sport. Animals are our relatives. They are respected for their gifts of healing and what they teach us about bravery and resilience. In Nahasdzáán our animals join as one with the dancers and musicians to play equal roles in expressing the journey from the First World to the Glittering World. Audiences experience animals in a new light" (Laura Tohe).

The cast comprises four operatic soloists (SATB), two dancers, animals (an owl, a wolf, a falcon, and a Mexican eagle), two animal trainers, and the seven-piece Ensemble Variances with conductor Thierry Pécou.
The ninety-minute dance-oratorio is performed in English. All animals in the production follow guidelines by ASPCA and the Humane Society. They are integral to the cast.

A conversation with Laura Tohe

Native American stories are filled with animals that are thought of as relatives, healers, messengers and heroes. The oratorio is loosely based on the Navajo stories and expresses what is happening on Mother Earth from the point of view of humans and animals.

A conversation with Laura Tohe

What is the opera about and what can audiences expect?

The oratorio is called Nahasdzaan in the Glittering World.  Nahasdzaan means Mother Earth in the Navajo language and the Glittering World refers to the world we are presently living in.  It is a long epic story and, according to Navajo stories, there were previous worlds where insects, humans, winged animals and four-legged animals lived, but because of disharmony and conflict they created in each world, they had to move into the next succeeding worlds.  The oratorio begins with the first world and makes its way into the Glittering World where the world is once again in disharmony and choices have to be made.  Some of the parts were written for animals—an eagle, raven, coyote and a spider.  However, we had to make some changes on the animals, so you will see live animals--owl, an eagle, and a wolf.  A human will play the part of the spider.  Native American stories are filled with animals that are thought of as relatives, healers, messengers and heroes. The oratorio is loosely based on the Navajo stories and expresses what is happening on Mother Earth from the point of view of humans and animals.

Can you tell us about the creative process of writing the oratorio and how you collaborated with Thierry?

During our writer’s residence at the abbey in Ambronay, France in 2017 we came up the skeleton for the oratorio.  We talked about our ideas, thoughts, goals, issues, wrote notes for the work and sketched them out visually on big sheets of paper.  That was helpful because we could refer back to it and make changes.  It was a good map.  Doing some research and reading helps me get the inspiration flowing before I start writing.  We created the initial work for the piece at the abbey.  I returned home to Phoenix and continued to write and send parts of the libretto to Thierry.  Over the course of a year in which we worked on the oratorio, Thierry and I sent lots of emails to each other making edits and changes.  We did most of our work that way and with a few phone calls in between.

What are the messages you wish to communicate?

The theme of the oratorio uses the philosophy of Navajo healing.  Thierry and I liked the theme of healing and to write a libretto based on this theme interested us very much.  In western medicine a patient consults a doctor, a diagnosis is made and a prescription and/or therapy are prescribed.  Navajo medicine follows a similar path in that a medicine man, who is part healer and psychologist is consulted and a diagnosis is given for a particular healing ceremony.  This is where western and Navajo healing differs– the Navajo philosophy of healing treats the cause, not the symptoms as western medicine does.  The cause might come from creating disharmony in the world or in one’s self.  When this happens a healing ceremony is called for to bring the patient back into harmony and on a path towards spiritual healing so that the individual may be restored to a state of well-being, spiritually, and psychologically.  Family and the extended family participate in the healing process from the beginning to the end, so the patient is not left alone to make their own way.  In this way, the patient can return to a healthy, productive and peaceful life among family and community.  While the oratorio begins with the Navajo stories of the previous worlds, it expands outward to the contemporary world and to what is happening to Mother Earth on a larger scale in the era of global warming.  One of our points of discussion, as we began this work, was how humans are living in disharmony with the earth.  How can we heal the earth polluted with poisonous air, plastic oceans that are killing aquatic animals, polluted rivers, toxic waste and pesticides poured on the earth, and the displacement of animals due to human development?  We want to leave the audience thinking about the choices we have to make for the future, not only for the future generations but also for all inhabitants of the earth.

What does it mean to you to have the rituals and philosophies of your people translated to the classical music tradition of the opera?

While this work is a hybrid work of indigenous story and classical music, the story is not a telling of a healing ceremony because they are guarded to protect their integrity and healing ability.  Navajo healing ceremonies already incorporate solo and group singing as part of the healing process as sound therapy, so using music and human voices were not a big stretch.  One of the take-aways from the oratorio lets the audience see that there are alternative philosophies of healing long practiced before western medicine came to the Americas.  Bringing this philosophy through the classical music tradition shows the power and beauty of this kind of healing ceremony.

What are your hopes for this oratorio?

Like any artist, my hope is that the audience will appreciate the work as a hybrid work that takes a Navajo story and classical music as a way to create a statement about healing.  I’d also like to see it travel to other places in Europe.

What is your next project?

I have several projects in the works—finishing a weaving and a book of poetry on Navajo weaving using paper I made from the plants used to dye wool for weaving.  My female ancestors were all weavers, and this project is my homage to them and my contribution to the weaving tradition in my family, even though my canvas is paper and not a loom.  I also have a longer book of poetry that I keep restarting and I’m still not sure which direction it will take.

What do you like about French culture? What are you looking forward to most about the premiere in Rouen?

Like many, one of my favorite cities is Paris and the culture that flourishes there and in France, always brings excitement and joy.  I’ve been mistaken for French.  That makes me feel at home.  Besides the premiere, of course, I’m looking forward to seeing my friends and hanging out in Rouen and Paris.  I love the outdoor bars, champagneries, ancient architecture, museums, and coffee shops, even though I rarely drink coffee.  I’m excited about the animals’ performance and how the audience will receive the work.

Lavender ice cream and French fries are my top favorites.  I also enjoy French cooking that uses organic and healthy foods and serves in small portions.  My favorite Native American food was food prepared by my mother and grandmothers.  But they have all passed on, so I would say the Pueblo Native American cooks in New Mexico who prepare delicious dishes during their tribal feast days are the best.

Concert at Rouen Opera in 2019